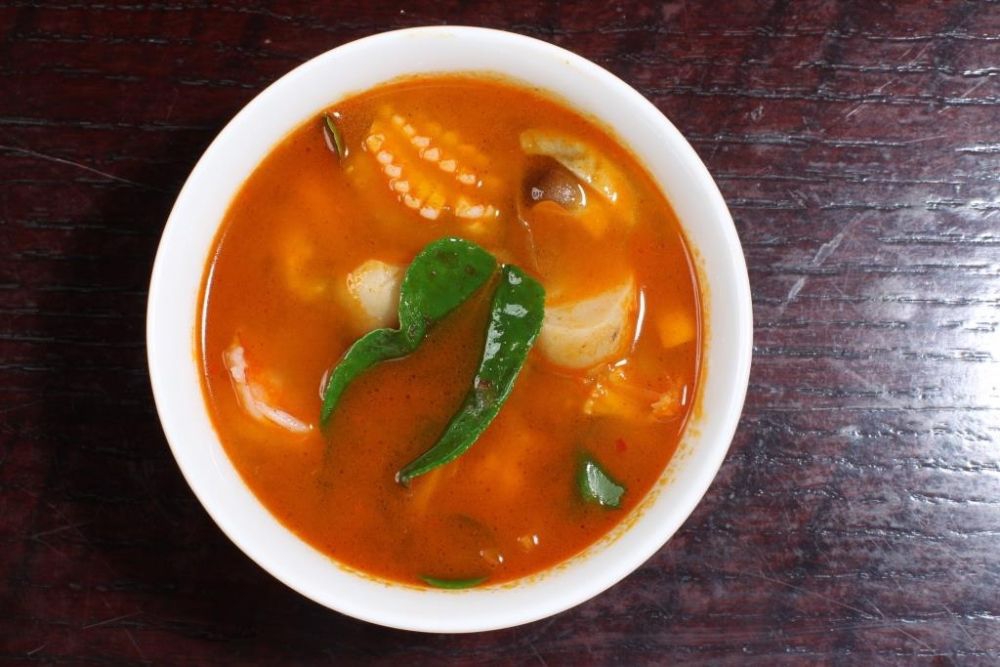 Kazakhstan is proud to consider itself a part of Eurasia, the meeting place of eastern and western cultures, and Line Brew Mix is a reflection of this blend of European and Asian traditions, seen both in the interior design and also the cuisine. The name itself, Mix, suggests that more than one culinary style is represented. Line Brew Mix in its modern premises on Zhambul (crossing of Tchaikovsky) is conveniently located and right in the heart of Almaty with its tree-lined streets and quaint little shops. Down a few steps and through a neat glass door awaits a welcome for everybody whether they've come for the beer, Oriental food, cigars, other drinks, steak, themed evenings devoted to meat or wine, and so on.

Either inside or on the sunken outdoor terrace can customers find the menu of an oriental restaurant which retains the dishes of the Chinese restaurant Di Wang which was here before. The Singaporean chef has worked in numerous places and brings expertise across a range of traditions. Unsurprisingly then, there is an Eastern room in which Cantonese cuisine accompanies other dishes from the Far East and, with the same things available throughout the establishment as a whole. On the oriental side, why not try Sichuan style dishes, tofu, dim-sum and stir-fries alongside Chinese classics including Peking duck and sweet 'n' sour chicken? The attention to detail in the Oriental Room is further evidence of the management's commitment to quality.

That would be to the right on entering. Instead, by turning left customers can get to two other rooms in contrasting style, the first being the Cigar Room which has the standard menus but a different ambience, not least given the living room style décor and furnishing. The room is class and a great place to have informal business meetings around the tables, all in a comfortable environment. There are two large-screen TVs, books in different languages and let's not forget the reason they named the room... top quality cigars blended to perfection!

Downstairs there is an American hall with a rich meat menu complete with marbled or fillet steaks plus salads, grilled fish, roast chicken and side dishes including fries, three types of mash and corn-on-the-cob. The range of beverages is impressive, including a wine list that features plenty of Italian and French vintage options. Choose instead from 13 types of beer (some varieties brewed in-house) or one of many cocktails.

It might be a good time to remind people that Line Brew Mix is not just a restaurant but also a brewery and with its own beers served alongside top Belgian beers, as well as other European drinks, is just as renowned for the pub side of its business as the restaurant side. Line Brew is a popular lager with three varieties selling very well across Kazakhstan, even when having to 'compete' with other better known global brands. So although we won't say that a visit to Line Brew Mix would be incomplete without drinking its own golden ale, we will drop the hint... give it a try!

The capacity of Line Brew Mix is 130 with an extra 80 seats available during the summer months on the outdoor patio area. So on any typical evening there could over 200 people enjoying dishes as diverse as steak (served in cast iron pans), Cantonese food and local Central Asian delicacies. There is no single focus although Line Brew Mix as a whole is proud to serve some of the tastiest meat in town and it would be this, and the beer that constitutes any recommendation we make here. We'll also add that the bread is baked on the premises, another Line Brew Mix unique selling point.

The music is another attraction with live performances every day, as diverse as the menu and ranging from jazz to dance, with popular DJs invited regularly. In the American Hall every weekend are popular bands such as Sahar.

The staff are not all highly fluent in English but are all capable of providing an appropriate level of service to visitors without a command of Russian so there will be no trouble getting the right dish. However the management team do speak fluent English so in the event that there is something you need to know, then this is an option available to you. It is unlikely, the Kazakh welcome is evident from the moment you arrive and attention is paid to all guests until they leave.