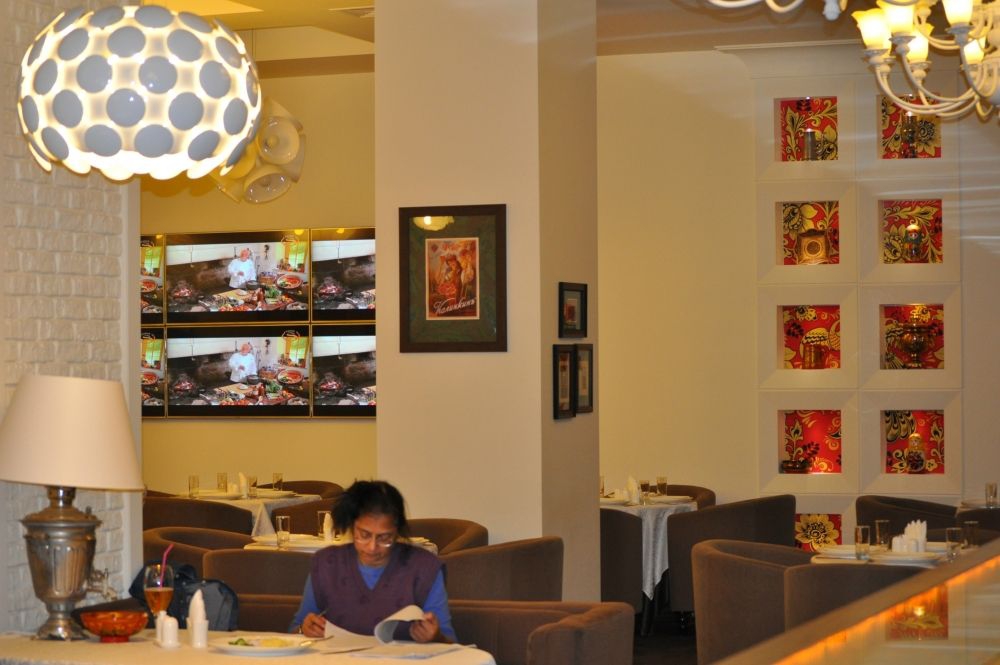 Often, the difference between a good restaurant and one that simply happens to be there is like the difference between quality music and those tunes just filling the charts. A lot of music, even though it may be very popular, is plainly only written to make money. It can be the same with places to eat out, some of them are all about dollars.And while restaurateurs have as much right to make a living as anybody else, there are those restaurants whose priorities are established after taking a whole range of other factors into consideration.

Karussel is one such place. This Russian restaurant in the Baiterek area of new Astana opened in March 2013 with a very lavish do which My Guide Kazakhstan had the honour of attending. The speakers included local dignitaries and of course the owner who was evidently sincere in his expressed commitment to quality. All the ingredients are natural, and the cooking processes are closely monitored right down to the precise temperature of the oven (to the nearest degree for every dish). Food is sourced from the best suppliers across the former Soviet Union and customers come from equally as far afield to discover that this is as good as any Russian restaurant, probably anywhere in the region.

Although it's reassuring in itself that in the modern world, the traditional approach to culinary art is still important to so many restaurant owners, it doesn't do the job on its own.Commitment must be matched with quality. What goes on the table is proof ofany restaurant's desire to impress and whatever else they do right they would be nothing without good food.

While this may be stating the obvious, it's worth saying because it's how Karrusel earns its place among Kazakhstan's best places to eat, from 12:00 till 24:00 daily. It has an extensive menu with a quality wine list. Russian food may not have the international reputation of that Italian or French, but there's no doubting the variety of options available. Whatever you choose here can in truth be considered a delicacy, and if you've never eaten Russian before, anything served in here is a prime example of that particular dish. Kazakhstan is not Russia, but the former Soviet Union is still as diverse as ever, culturally and ethnically. Russians are a big part of the Kazakhstani community and their contribution to life here helps make it such a special place.

The main area seats 120 and is reminiscent to a degree of a banquet hall, while at the same time people wanting privacy won't be disappointed. Up a few stairs is a very lavish VIP room, if your meal is for a select group and you are interested in the VIP treatment, Karussel has both the accommodation and the service to make for either a productive meeting or an enjoyable private party. The word posh can have a negative connotation, but the VIP room here manages to be quite that without being snobby in any way.

Suggested dishes? Well, pretty much anything that takes your fancy, although we are delighted to recommend the salmon, which the owners are proud to say is made according to very strict cooking methods.

The separate drinks menu is as good as the food menu and with a stylish bar aside the main dining area there is something for everybody, from expensive wines and cocktails to traditional Russian fruit juices.

Incidentally, the immediate vicinity is largely exclusive apartments and government buildings, and while a local restaurant is inevitably a first port of call for residents and local staff, we can assure you that the number of VIPs eating in Karussel does not owe simply to the fact that it is but a few minutes' walk from the office.

It's worth saying a little about the décor. Naturally, a Russian theme is evident in everything from the wooden floor to the photos and pictures on the walls, with the ornaments worth a little attention in themselves. There's nothing kitsch here, including the large screen TVs which show programmes beamed by satellite from north of the border. And like the entertainment screened on the far wall, the lighting is interesting but not obtrusive, and the ambience is just right.

The Russian musicplayed is often traditional folk which I must admit is not something I would play at home, but something I was very disappointed to lose when they changed the CD. It was perfect, a topping to the most Russian experience available outside Russia itself. The contemporary music is also very fitting.

A quick word about the service... waiting staff are friendly and speak enough English to be of service to visitors (especially the manager who is particularly fluent) although at the time of writing payment by credit card is not available. Check it out before you dine, but bring cash to be on the safe side. And however you pay, note that in spite of the high class of everything here, eating on a budget is an option for those either so inclined or constrained. My Guide would particularly like to stress that the prices here are commendably low considering the quality you get in every area.

So whether or not you are acquainted with Russia, you are sure to find it here in Karussel and perhaps a desire to visit the great nation will determine your next port of call after Astana. If not, stay local, there are plenty of things to do, not least nip back to Carousel to eat in style once again.