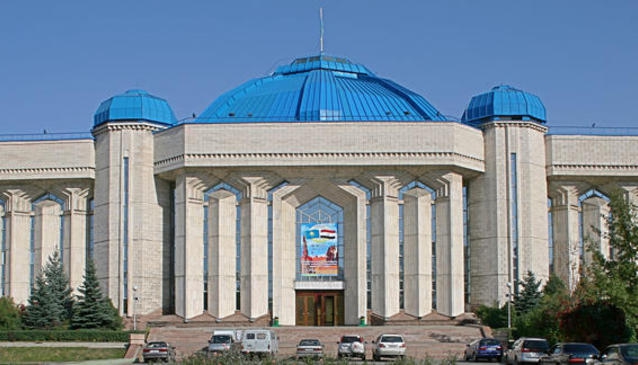 Directions to THE CENTRAL STATE MUSEUM OF KAZAKHSTAN

The Central State Museum is one of the biggest and oldest museums in Central Asia. At present the collection of the Central State Museum consists of more than 300,000 artefacts of worldly and religious heritage. This museum, consisting of seven main exhibition halls takes visitors on a journey through Kazakhstan’s history from its early nomadic roots to the present time.

The first hall consists of palaeontology and archaeology collections. There are paleontological artefacts from more than 300 sites all over Kazakhstan. Of particular significance are the unique rich osteological materials, fragments of petrified trees, remains with insects and fish imprints, microscopic endospores and plant pollen that date back several million years. Archaeological displays present fascinating evidence of ancient constructions used for funerals, as well as those more modern used for many other purposes. Note also the dioramas made in the same style as days gone by. The museum experts have recreated the ceremonial and military ammunition of the famous Issyk Golden Man, the Honourable Saks Warrior. The Golden Man was restored by a well known specialist, K.Altynbekov as part of an innovative scientific project by the archaeologists Kemal and Alisher Akishevs.

In the second hall you can see items of traditional Kazakh culture, including rich collections of arms from the Eighteenth and Nineteenth centuries, jewellery, carpets, clothing and other items made of felt, and a variety of Kazakh national embroidery. Of special interest is a full-size display of the Kazakh nomadic house, the yurt. The most significant item in the collection is the original Beshmet, an impressive sample of gold thread embroidery. The item belonged to Fatima, wife of the famous Zhangir Khan, the last Khan of Bukeevskaya Orda. Do not miss the authentic military outfit of Arystan Sultan, decorated with ayats from Holly Koran (first half of the 19th century).

The collection of the third hall is devoted to the history and culture of various ethnicities that have lived in the Kazakhstan territory. You can examine unique photos, rare documents, household items, artefacts of arts and crafts produced by various cultures living in the region of Kazakhstan: Russian, Ukrainian, Belarusian, German, Chechen, Ingush, Turkish, Kurd, Uyghur, Korean and other peoples. There is also an exposition of “Kazakhstan during the World War II (1941-1945)” in the third hall.

The fifth hall is called “Open Fund” - “Archaeological Gold of Kazakhstan”. The exhibition consists of unique artefacts from various regions of Kazakhstan, original items made of gold dating back to the period of the early nomads, the Saks, Savromats, and Usuns. They were found in the kurgans (burial mound) of Chilikty, Tarasu (6-7th centuries BC), Pokrovka (5th century BC), Zhalaulinskiy (7-8th centuries BC) and Kargalinskiy (1-2nd Centuries BC). Also on display are relics of treasure and monuments from the Otrar-Karatau culture (4-5th Centuries AD).

The sixth hall, the Museum of Anthropology is the only one in Central Asia. The display offers a unique journey into ancient times of humankind to “witness” the primitive lifestyle of prehistoric people and the birth of civilisation. The display is devoted to the history of human development, the origin of people, the first migration across the continents and the ethno-genetic history of the Kazakh nation.

The seventh hall is a collection of artwork by H.G. Khludov (1850- 1935) a distinguished Russian painter, ethnographer and historian. He was a member of the Turkestan group of archaeology aficionados and founder of Semirechye department of the Russian Geographic Society. The depiction of the traditional culture of the Kazakh people and the beauty of Kazakhstan’s landscapes are central themes in the works of Khludov. The Central State Museum takes pride in the unique collection of 214 paintings by H.G. Khludov.

The exhibits are in Kazakh and Russian. Guided tours in Kazakh, Russian and English are available.