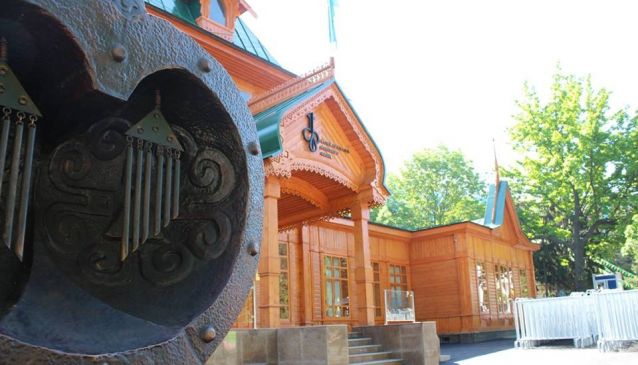 Any nation proud of its culture has to have the utmost respect for its musical heritage simply because history has shown that music is central to the identity of a people or a country, in most cases. Considering therefore that Kazakhstan is a multi-ethnic country with a long and rich musical history, our desire to showcase this in a single exhibition is inevitably going to result in a very impressive collection.

The Museum of Musical Instruments aside Panfilov Park is a popular tourist attraction in Almaty and a nice trip to combine with a few hours at the Zenkov Cathedral nearby. The extensive collection of ancient and modern instruments is housed in an interesting wooden structure, almost Swiss chalet in style and one of the oldest buildings in the city. The recently renovated and redesigned museum incorporates modern and interactive technology with very traditional décor to make it the ultimate exhibition, and a very enjoyable hour or more.

There are seven main rooms each with a different focus, the pride of place going to the amazing collection of dombras including a three-stringed model owned and played by the great poet Abai himself. And while without doubt there are a range of treasures on display, this item is perhaps the biggest attraction, given the impact his writing has had on Kazakh cultural history.

Other important Kazakh figures are featured, among them the late Nurgissa Tlendiev whose modern compositions have ensured that the essence and spirit of Kazakh music will thrive in the future. His own instruments are on display in the same room as Abai's, quite an honour for any performer of any nationality.

While the main instrument represented is the dombra, there are others which make up not only the traditional Kazakh orchestra but those of many other countries too, and the two rooms in which the tour normally comes to a close is one in which traditional instruments of different non-Kazakh ethnic groups can be appreciated. Russian instruments are also part of the main tour, such as the balalaika and bayan (accordion), but the museum curators have also made the effort to introduce Hungarian, Uzbek, German, Chinese and many other instruments which are a great asset to the collection.

The museum also boasts a shop and has a master craftsman in-house who makes high quality dombras for sale at competitive prices. You can also play before you buy, although don't be fooled by the ostensible simplicity of the two strings. As the author, a Brit, knows from personal experience, mastery of the nineteen frets does not come easily and a virtuoso performance is as breath-taking as that on any other instrument.

Let's not give the impression however that this is a twenty-minute walk simply looking at old instruments. Some of the artefacts are there because of their age and in truth, some of them are very very old. However others are there because of their significance. Many of the dombras on display have their own part in history and a story to tell. We won't spoil that for you, but take the hint, the museum represents the story not just of music but of how it shaped the culture and the society of its day. Central Asia, long before the days of Kazakhstan (although not of Kazakhs) was a nomadic territory ruled by khans (kings) and many of the musical legends that live to this day are associated with their rule.

It is also said that the traditional Kazakh melody, the kui, is the soul of the people of the ancient steppes and that it lives to this day is highly significant. But however you view the essence of music, consider that Kazakhs traditionally see it in this way therefore conclude that this collection of instruments goes far beyond what they represent physically. These standard or at times rather odd and even seemingly unplayable instruments are quite the very history of what being Kazakh really is. If you are interested in modern Kazakhstan with its myriad of stylish things to do, be this in Almaty or Astana, then come along, enjoy the party, and make The Museum of Musical Instruments a part of your itinerary. But if you are led to this part of the world because the Central Asian life of days gone by somehow resonates with something inside you, then you simply cannot miss this museum, whatever you may have on your iPod.