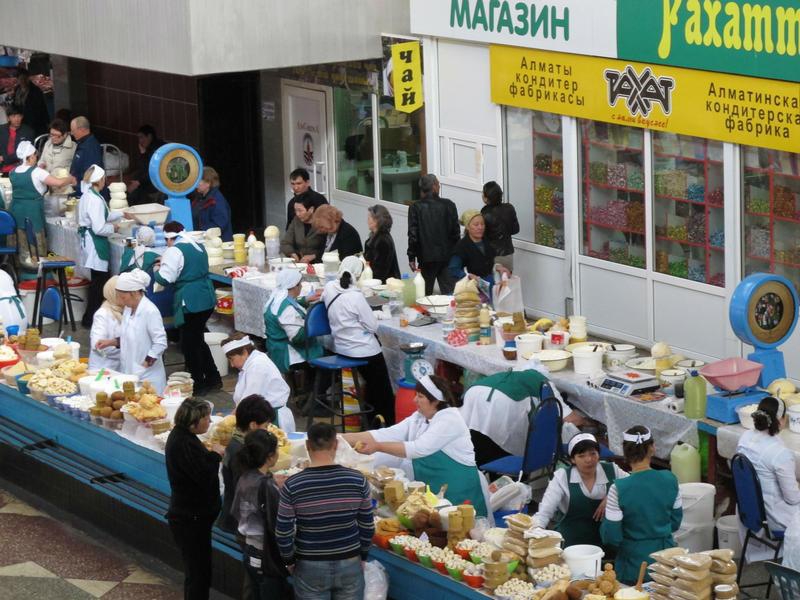 A trip to Almaty wouldn't be complete without a stop at the Green Bazaar. It is an opportunity to see Almaty’s main retail centre, experience its eastern atmosphere, colours, smells and crowds. Bazaars in Almaty are one of those few places that reveal ethnic diversities in a contemporary world very much tending to the uniform. Today Zelyony Bazaar brings goods and delicacies from all over Asia, the Middle East and several other regions of the world.

Having been at the Green Bazaar, you can see that the central part of it is a great place to satisfy your gastronomic desires. Pavilions line the isles here providing a seemingly infinite selection of fruits and vegetables, dairy, traditional Kazakh food and drinks, delicious meat and fish delicacies, homemade cheeses and Korean-made salads. Also occupying a huge area in themselves, a wide choice of dried fruits can be tried before buying. The market brings fresh caviar from the Caspian Sea, as well as medicinal varieties of honey, including those from the Altay Mountains.

The Green Bazaar is conveniently located in the old part of Almaty and there are many buses, trams, trolleys or even taxis that will get you there.